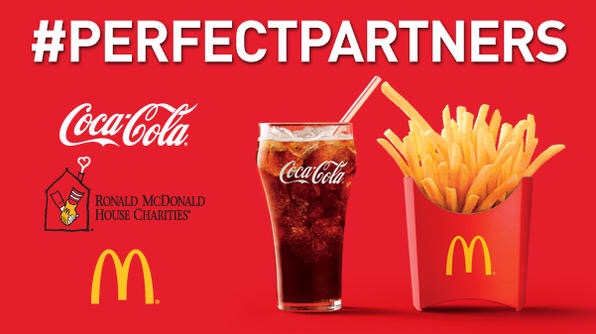 Today Coca Cola and Mc Donald’s together came out with an international press release to urge mr. Blatter to step down as chairman of FIFA in order to start a cleansing of the institute. Corruption is so widespread within FIFA that the negative energy pouring out of the subject is starting to hurt the carefully crafted corporate images of the two fast food giants.

I thought that this was a very intersting statement from the two. They’re pouring billions of dollars into advertising campaings and sports funding with the single goal of creating a mindset in (young) customers that drinking Coke and eating Big Mac’s is part of a healthy lifestyle if you make the right #choices. They are actively opposing government policies that would tax sugar, ban soda-dispensers from high schools or prevent funding of “research” that would prove the benefits of learning consumers to “choose” the right foods and drinks.

but they are not.

Funding of Epode, the global community based anti-Obestitas platform, is not shown in their CSR reports. Mc Donald’s gives away hamburgers to my children in the sports shop when we buy new sporting clothes.

These two giants of sugar and fat hurt our children’s health every day and their well funded lobbyists know the route to members of parliament who only read the glossy CSR-reports. Policy ideas that would hurt their core business don’t even make it to draft state, let alone legislation.

Coca Cola and Mc Donald’s are far, far worse than mr Blatter when it comes to corrupting the minds of young consumers. But the shiny red and yellow logo’s will soon push that inconvenient truth to the background because we have all these happy commercials to help us remeber we have #choices.

Choose Happiness? Choose something else than red and yellow.