Kate Raworth is coming to Amsterdam januari 8th 2018. We would like to discuss a way to get healthy school meals implemented without the interference of these companies: 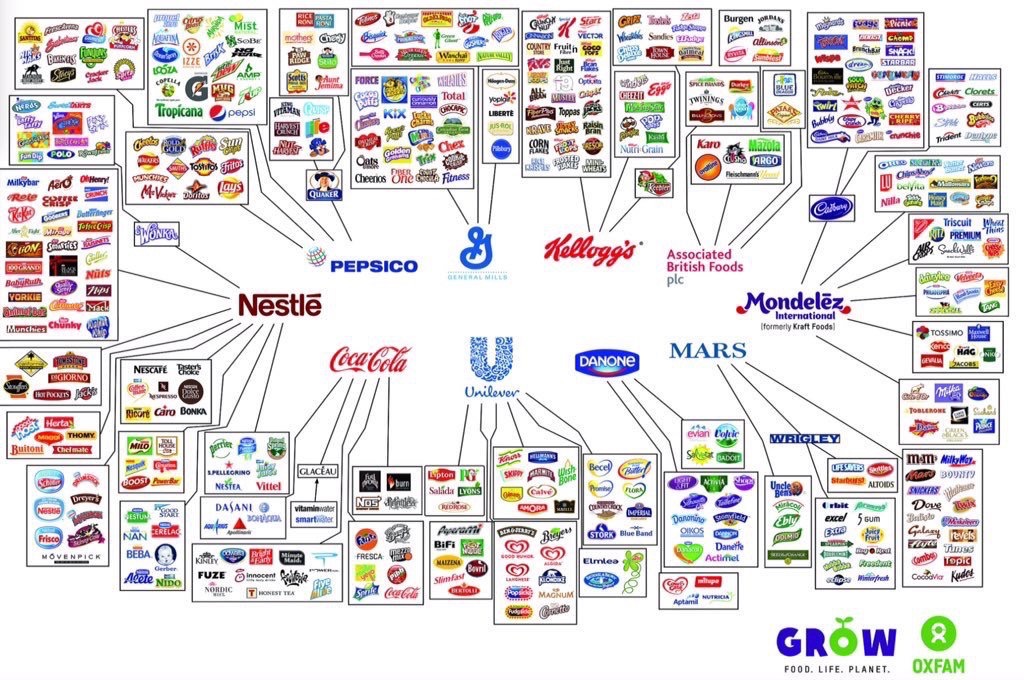 We would like to use “The donut” as new paradigm for thinking about public private partnerships. 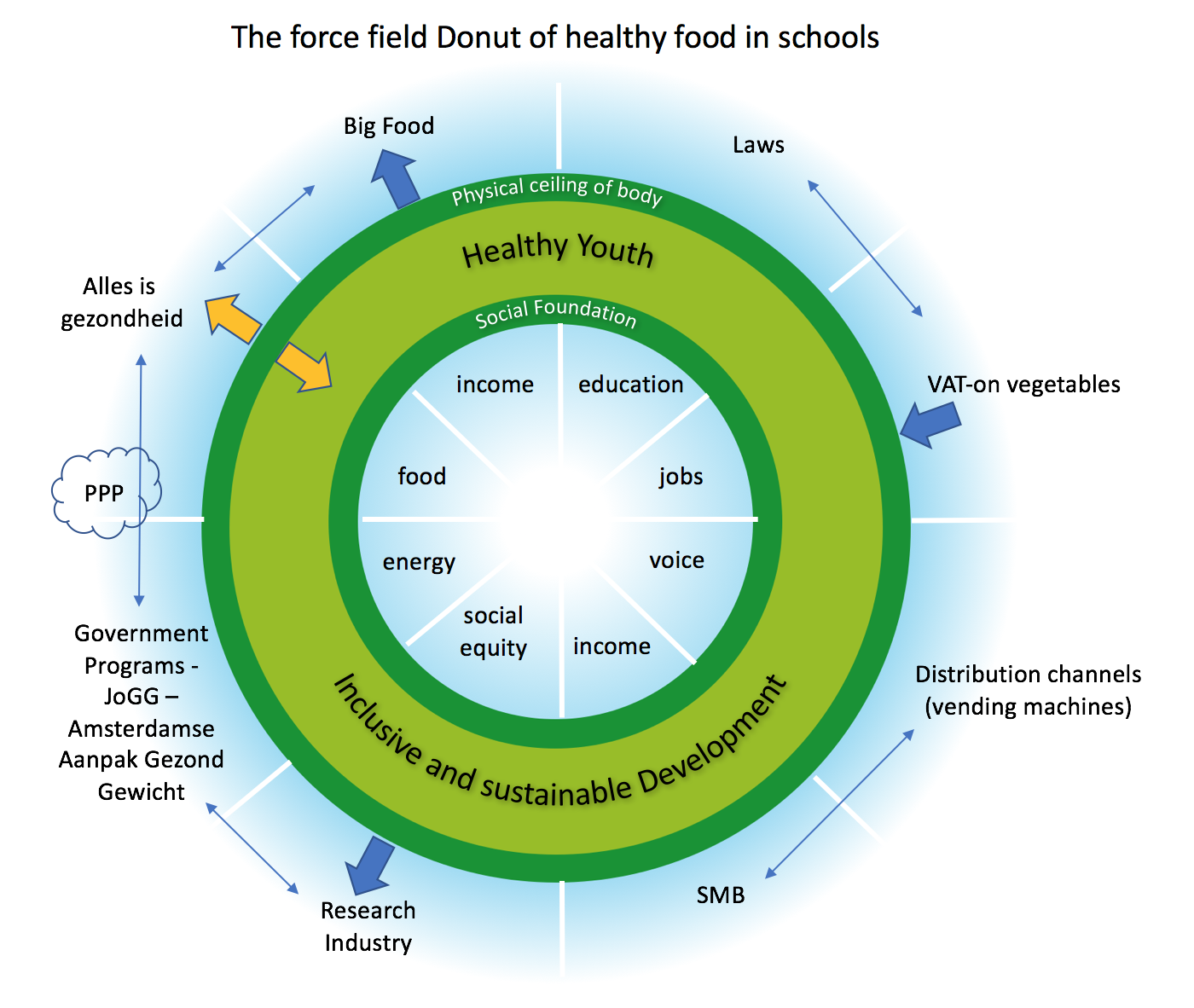 The City of Amsterdam claims to have found the miracle cure for the obesity epidemic. It seems too good and especially too simple to be true, but does it raise eyebrows? Quite the contrary: it gets international coverage. If it’s enough to make a critical reader suspicious; it should definitely have journalists digging deeper into the matter, rather than enthusiastically copying jubilant press releases.

How did we arrive at this point, where Amsterdam gets away with hailing a simpleton panacea as a revolutionary step towards solving a serious problem? More importantly, who gains by presenting it as such? A bit of history.

About fifteen years ago, JoGG/EPODE was created. The names are respectively Dutch and French acronyms roughly signifying “Efforts Preventing Obesity Amongst Children”. The starting point was laudable enough: creating a healthy environment for children to keep them from getting overweight. However, somehow, in the course of the years this crystallized into “drinking water and getting enough sleep”. Now, surely, there is more to it than just that?

When wondering about the where and why of a situation, it is usually a good idea to follow the money, as Watergate reporters Woodward and Bernstein have taught us. Food, worldwide, is big business and drinking water (instead of fruit juice) and getting enough sleep are comparatively harmless to industrial interests. With this in mind, let’s take a closer look at how the Amsterdam ambition evolved over the years. (and the chosen aims of drinking water… zoiets?

In 2013, Amsterdam set itself a lofty goal: by 2033, there would be NO overweight children. Nevertheless, a mere four years later, we find JoGG focusing on a relatively small group of children in an Amsterdam neighbourhood that is far from average—a drastic downgrading of the initial target, which was conspicuously absent from the press handout the City issued a few weeks ago.

A look at the JoGG web site makes one none the wiser—except if one happens to have been following the project since its inception, when it becomes blatantly apparent that all information about previous goals and their funding has been systematically deleted. Of course, there are parties aware of this, but they have no PR budgets, as surely the Guardian is aware.

Facts That Did Not Make The Press Handouts

Obviously, a 12% reduction in child obesity in a mere four years (from 2012 to 2015), as the Amsterdam deputy mayor rapturously states, would be no small feat—if it were true. Unfortunately, it isn’t. The figure was obtained through cherry-picking of data. Figures from the Amsterdam Public Health Service clearly show that, until 2012, both obesity and overweight were on the rise in most of Amsterdam, with the exception of two of the “better” neighbourhoods where, whilst obesity was still rising, overweight conditions were on the decline. These were the neighbourhoods the effort was concentrated on.

Normally, one does not get away with such selectivity in results. However, one does when the parties conducting the project are the same ones as the ones charged with evaluating it. This is what happened in Amsterdam, this is the reason why a project costing millions is allowed to go on without any checks and balances. It is easy to see how the municipality gets away with their jubilant and highly uncritical version of the achievements.

But why would they do it this way? Let’s follow the money once more: the project is co-funded by such parties as food giants Nestlé and Danone, who have obvious interests in diverting attention from what is in all likelihood a far more obvious cause of the obesity epidemic.

The Bane of Public-Private Partnerships

Basically, the results as they are presented in Amsterdam’s press handout are a result of circular reasoning. In essence, the system is based on a completely self-sustaining hot air bubble.

The entire JoGG approach provides governmental entities a convenient single point of spending. They can claim they prevent obesity because they are funding JoGG.

JoGG can claim their approach work because the system is purposely built around a system without built-in motivation for results: researchers and reviewers, after all, are the same persons. There is, however, a motivation for bias: it is clear that funding will continue as long as the desired results are delivered.

Precisely which results would be to the taste of the industrial parties funding the results is easy to figure out: they are best served by results that do not adversely impact profitability and that do not point in the direction of taxes on unhealthy industrial foodstuffs. And we all know that it is not advisable to bite the hand that feeds you.

Nothing Out, Nothing In

Any outside party trying to probe into developments receives no meaningful information. Instead, research programmes regularly change names of structures, and public reports are subsequently flushed from web sites.

Meanwhile, JoGG organizes international events—sponsored by Nestlé—where JoGG Amsterdam is showcased as a most successful approach, enthusiastically corroborated by the City of Amsterdam who, after all, shares in the glory. It doesn’t end there: the success is immediately cashed in upon by selling the methodology—in which, needless to say, parents play no role—to extra-European markets, all the way to Dubai.

One has to be realistic: an in itself worthy goal has been effectively hijacked by parties who are corrupting it because of either profit or political success. Preventing obesity has become big business, and big business invariably focuses on profitability and saleability rather than on effectiveness.

Nor do we need all these millions spent—millions we are essentially providing ourselves every time we buy the food industry’s product. Isn’t the cause of the obesity epidemic staring us straight in the face? We need to eat colours, not processed food items from coloured packages.

Amsterdam deputy mayor Van den Burg claims the food industry is actually doing the right thing by going against their own interests in telling restaurants and sports facilities to sell healthier food and by banning soft drink adverts inside city-owned sports stadiums. The truth of the matter is that Coca-Cola Olympic Moves is still organizing and financing school sports tournaments, with their distinctive colour red all over the place.

Van den Burg is probably right in saying that such events are no longer sponsored by his city. Why should they? By now, the setups profitability is well-proven, and Coca-Cola can be confident that there will be ample returns on the money poured in.

A PR and Marketing Tool

At best, we are looking at a PR strategy also known as “healthwashing”. Involve your company in a lofty goal (i.e. reducing child obesity) and it will look the better for it. Consumers will automatically assume that if you care for the health of their children, your products will therefore be good for them.

We are also looking at a marketing tool. Hosting events where your company supplies props which just happen to be in your extremely distinctive corporate colour constitutes subliminal advertising at least.

Funnelling money into longitudinal research that has been leading nowhere and shows not perspective of leading anywhere in the future is all the more dubious since part of the money we are referring to is actually government money. By collecting subsidies for showcase research with a hidden agenda (to steer away from recommendations that may be harmful for business) funds are appropriated which could and should be put into the hands of parties devoid of commercial interests.

It is no coincidence that the Netherlands was chosen as the hub of this scheme. We are all aware that there are substantial tax advantages to be gained by setting up activities in the extremely favourable Dutch corporate tax climate—thus, Dutch citizens themselves are financing a counterproductive setup, in which local government bodies are persuaded not to take action against vending machines containing less than healthy items and to discourage a levy on soft drinks loaded with sugar.

The Netherlands have seen four decades of endless conferences on the topic of who should be responsible for the contents of school meals. JoGG and EPODE can doubtlessly stretch these meetings for several decades more without tangible results—effectively stalling, in spite of the Dutch Minister of Public Health chairing the meetings.

JoGG have had their turn and have come up with nothing. All their pilot projects and prestigious kick-off parties have failed to achieve anything except provide publicity for their commercial partners. It is our opinion that JoGG’s true goal is to prevent effective policy from becoming effective.

We need to work towards an environment in which people make choices—INFORMED choices, not choices induced by kids marketing in supermarkets, by popular YouTubers gorging themselves on glorified sugar syrup, by sports canteens offering a choice of scantly healthwashed Coca-Cola products.

Most of all, we need to effectively fix a world in which Big Food is invited to participate in policy discussions but where we, the parents, are denied any involvement—whereas we ask no better than to see REALLY healthy meals in schools, based on fresh and seasonal vegetables rather than industrial products supplemented with a token stale apple from a European surplus stockpile.

We are dying to help implement local food with minial CO2 emission. We would love to see unemployed persons re-schooled to the profession of school canteen cook or food and health teacher, empowering future generations to make knowledgeable choices. We would love to see all the money now spent on showcase research to actually stay within the community where it can do some good instead of lining the pockets of the likes of Coca-Cola, Nestlé and Danone.

They have had their chance. Can we now have our turn, please?

The authors are two concerned parents from Amsterdam who are personally struggling to get healthy food programmes implemented and who have consistently met with deaf ears from politicians and officials.